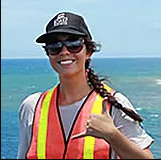 Pōmai Stone received her B.A. in Hawai‘ian language and Psychology at the University of Hawai‘i at Mānoa in 2010 and is currently a Master’s candidate in the Kawaihuelani Center for Hawai‘ian Language. Since then, she has been teaching, translating, and writing for both Hawai‘ian and English speaking audiences. She is also a practitioner of traditional Hawai‘ian practices such as lomilomi and lā‘au lapa‘au. Along with Iāsona, Pōmai serves as a translator on the Kahua A‘o team, integrating relevant articles into the lessons, and grounding them in intrinsic cultural knowledge and in the Hawaiian language newspapers.