Farmers Insurance Professor of the Week 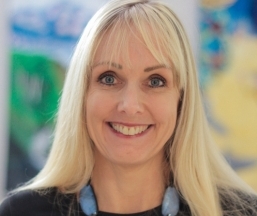 Charlotte Frambaugh-Kritzer, Institute for Teacher Education Secondary Program Director, is the Farmers Insurance Professor of the Week. Announced on April 5, 2019 during a Rainbow Warriors men’s volleyball game, the recognition is the first in a new series. UH Athletics will highlight a professor of the week during games over the Stan Sheriff Center jumbotron.

Frambaugh-Kritzer has been with the College of Education (COE) since 2011, supporting teacher candidates to design socially just lesson and unit plans. Her research interests include disciplinary literacies and teacher education, and her work has appeared in many top tier journals.

In 2015, Frambaugh-Kritzer received the COE Excellence in Teaching award. The following year, she was named the 2016–17 Hubert Everly Endowed Scholar. In 2018, she helped co-coordinate the Hawaiian Bird Symphony project which has reached over 9,000 students (grades 4–12) on O‘ahu. Currently, she is leading a weekly Literacy Clinic at Waipahu Intermediate School, supporting teacher candidates who teach literacy to 7th graders.