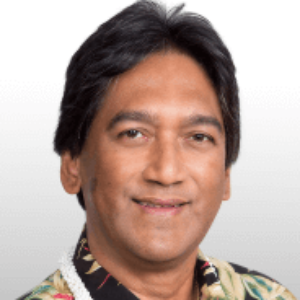 Herb Lee, Jr. has been the Executive Director of the Pacific American Foundation (PAF) since 2005 and in 2018 appointed as President and Chief Executive Officer. Herb is a Native Hawaiian that has led multiple and highly successful gifted and talented youth leadership programs, career planning and development, STEM education and culture-based curriculum projects including the award winning “Kahea Loko and the Aloha ‘Āina” projects. His programs have trained over 6,000 teachers statewide in over 150 schools and benefited over 100,000 plus students families at the Waikalua Loko fishpond alone spanning grade levels P to 20.

PAF has been recognized as one of the leading non-profits in the development and training of rigorous culture-based education programs for both Native Hawaiians and non-Hawaiian students. In 2011 he founded the Hawaii Institute of Knowledge and Innovation (HIKI) under PAF. In 2013, PAF was selected as one of the “Anchor Agencies” to help lead the transformation of the Castle Complex of schools, one of the first in Hawaii’s Public Education system. He also has 32 years of experience as a community involvement specialist and has been a recording artist, Hawaiian musician, and a cultural practitioner for 43 years. He is one of the founders of the Waikalua Loko Fishpond Preservation Society in Kaneohe, O’ahu, a non-profit organization whose mission is education through the protection, preservation, restoration and perpetual stewardship of an ancient (400 year old) cultural resource, now owned by PAF since 2013.

He serves on numerous Boards and community groups and in 2011 was selected to the National Environmental Justice Advisory Committee Indigenous People Working Group and received the Historic Hawaii Foundation’s highest Preservation Award for the work at the Waikalua Loko Fishpond. In 2014, he received awards including: (1) one of ten in the country designated by President Obama as a “Cesar Chavez Champion of Change;” (2) the Hawaii Maoli and the Association of Hawaiian Civic Clubs as one of three to receive its “Ka Mana o ke Kanaka, the Spirit of the Hawaiian” award; (3) the Rotary Club of Honolulu’s, Jerry C. L. Chang “Peacemaker Award,” and (4) the O’O award from the Native Hawaiian Chamber of Commerce, 2017.