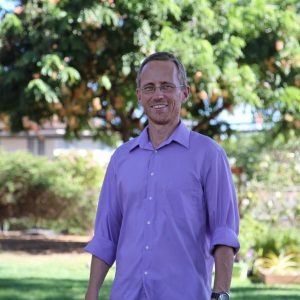 "By studying second languages, we expand knowledge exponentially to include different modes of thinking, views of reality, and cultural practices."

What drew you to the World Languages program?
I was drawn to the great faculty and strong focus on multi-cultural issues.

Where do you work?
I conduct medical studies for the Centers for Disease Control.

How did you develop your interest in language education?
From small kid time, languages have been my main interest.

Why is the study of language an important subject area?
Language permits access to all human knowledge. By studying second languages, we expand knowledge exponentially to include different modes of thinking, views of reality, and cultural practices. We become much more adept at interacting with, and understanding, the world. This leads to a more enjoyable life.

Describe your road to becoming an educator.
I came to education later in life. After graduating with a degree in French, Spanish, and linguistics, I worked as a French translator for construction projects in the Carribean. Next, I taught English in South Korea at a private language school. Subsequently, I pursued language and philosophy interests in law school, interning with a Supreme Court Justice and representing U.S. immigrants with political asylum claims. After graduating, I worked for a large firm, a Silicon Valley company, and then the City Attorney’s Office before returning to education.

How has the COE helped you on this road?
The College of Education has been very supportive throughout with its flexible evening program, accessible faculty, and scholarship support.

What are your future plans (post-cert)?
I plan to spread the love of world languages to our keiki here in Hawaiʻi Nei!

I'm interested in learning more about a degree or certificate in .