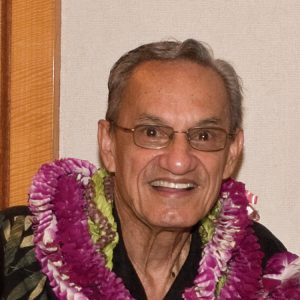 “There are not enough years in one’s life to give to people, to the community...”

Ronald E. Bright, beloved theater director and College of Education (COE) 2008 Distinguished Alumnus, passed away on July 6, 2015 at the age of 81. Over his amazing six-decade career, Bright directed more than 100 musicals and plays and created the Castle Performing Arts Center, which became a prototype for learning centers across Hawaiʻi.

Born and raised on a farm in Hilo, Hawaiʻi, Bright had plans to become an accountant before coming to UH Mānoa in 1953 when he chose, instead, to major in education. After earning a bachelor’s degree and professional diploma in secondary education from the COE, Bright began his tenure with Castle High School (1957–1993) where he taught and transformed the theater program. He would return to the COE in 1973, earning a master’s degree in secondary education.

Bright performed in public and private venues, appearing in television commercials and programs throughout the years. In his retirement, he continued to direct musical productions at Windward Community College’s Palikū Theatre and worked with students until just a few years ago. Many of his former students have gone on to successful careers in show business.

The recipient of numerous awards, Bright also gave back through the Ron Bright Scholarship Fund at the Hawaiʻi Community Foundation. Among his awards, he received a UH Founders Alumni Association Lifetime Achievement Award, the 2009 Milken Educator Award, the Educational Theater Association National Hall of Fame Award, the Hawaiʻi Alliance for Arts Education Alfred Preis Award, and the Hawaiʻi State Theater Council Poʻokela Award. In 1994, the Castle High School theater was named after him.

“There are not enough years in one’s life to give to people, to the community,” said Bright in a 2008 COE article. “To give to them what you have in you that’s best, to me, is success.”

I'm interested in learning more about a degree or certificate in Secondary Education.