MEd in Educational Foundations, What School Could Be Ambassador 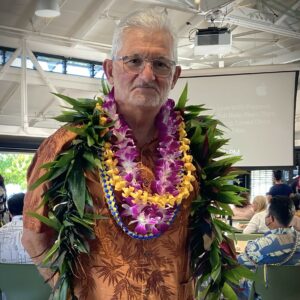 “My North Star is still the same: to find and highlight imaginative, creative, and innovative public, public charter, and private school educators.”

I was born and raised on the Windward Side of Oʻahu, in Kahaluʻu. We were a family of nine – six boys and one girl. I am the youngest. My father was a longtime family physician on Lāna‘i, Molokaʻi, and Kāne‘ohe. My mom was a long-time community activist, including work with The Outdoor Circle.

Road to Becoming an Educator

Kāne‘ohe Bay and the surroundings were my childhood playground and classroom. I was not an engaged kid in school. Mostly, I wanted to come home each day and build rock walls and chicken coops, fish in the bay, or bodysurf on the North Shore. Growing up, ma ka hana ka ‘ike (through doing one learns) was my mantra, which later informed my desire to become a teacher. I was also influenced by my brothers, Charlie and Paul, who began farming in Waiāhole/Waikāne in the early 1970s.

I finished my undergraduate degree at the University of Iowa after careers as a chef and hotel manager in San Francisco, San Diego, and back in Honolulu. As an older student, I was motivated to learn, which is what happens after 12 years of experience “in the field.” After Iowa where I got a degree in history, I moved home to Hawaiʻi and worked first as a HIDOE/private school substitute, then got a job teaching history at Punahou, my alma mater. Many years later, after teaching at Punahou and La Pietra, Hawaiʻi School for Girls, I decided to get my masterʻs in educational foundations at UH Mānoa. Those three years of intense graduate work from 1999 to 2003 were a joy. My thesis focused on the history of the service-learning movement and my advisor, Mary Anne Raywid, became a friend, mentor, and coach.

While teaching at La Pietra, I became interested in service-learning and started incorporating it into my teaching. It made sense that I focus my thesis on the concept. During  my three years in the COE program, I attended numerous conferences and became interested in the history of it as a “movement.” My thesis focused on the fruitless arguments within the moment over whether to hyphenate service-learning, or not. In general, in my humble opinion, we in education spent way too much time arguing over definitions of words. 🙂

What School Could Be: A Global Virtual Community

My official title is Chief Evangelist for What School Could Be. I am also the Host of the What School Could Be Podcast, which is approaching 100 episodes and 50,000 downloads in over 70 countries worldwide. I began volunteering my time with Ted Dintersmith in 2016 after my second screening of his film, Most Likely to Succeed. Over the years, I supported efforts to reimagine education in Hawaiʻi, which accelerated after Ted wrote his book, What School Could Be. In January of 2020, I began working with What School Could Be as a paid consultant and was involved in building their global online community, which now has over 11,000 members worldwide.

My podcast started in the back of the Apple Store, which is my “day job.” I was chatting with local tech guru, Ryan Ozawa, and we discovered we both wanted to build a podcast. I already had the mission and vision, which you can find at WSCBPodcast.com. My North Star is still the same: to find and highlight imaginative, creative, and innovative public, public charter, and private school educators. My podcast gives them a place to tell their stories and correct the record about education in Hawaiʻi and across the globe.

One of the programs within What School Could Be is the resource library known as the Innovation Playlist. Back in 2017, I assembled a team to do an Innovation Playlist training in partnership with Canoe Complex CAS, Lindsay Ball, for all 11 schools in the complex. At that two-day training on Maui, I resolved to make a film about innovation happening at some of the Canoe Complex schools. The film took two and a half years to make. Searider Digital Productions and Josh Reppun Productions co-produced and co-edited the film, and the footage was shot by Searider Productions students.

I'm interested in learning more about a degree or certificate in Educational Foundations.