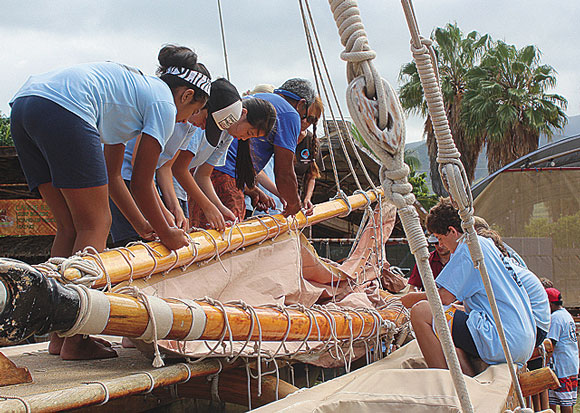 Students learned to tie knots and raise the mast of the Mo‘olele canoe built in 1976.

LAHAINA – Four months before the planned launch of Lahaina’s own Mo’okiha o Pi’ilani voyaging canoe, 50 sixth-, seventh- and eighth-graders from Sacred Hearts School hosted by canoe builder Timmy Gilliom and members of Hui o Wa’a Kaulua got a kind of short course on what the effort to put the canoe into the water on Dec. 21 is all about.

Gilliom, who said the canoe ‘ohana is still $50,000 short of funds to buy anchors, canvas, chain, masts, rigging and other equipment, was introduced to the attentive students by teachers Mary Anna Waldrop and Bradley Mason.

Hawaiians and their helpers first built the Mo’olele, a coastal canoe, in 1976, and began the project for the much more ambitious voyaging canoe that can cross oceans in 1996.

“I love this canoe,” Smith noted in an e-mail. “Thousands of people have touched (it) and put their sweat and dreams into her. Now, a rejuvenated group of workers are committed to launch her, and it’s happening!

“Everyone on Maui has a chance to become a stakeholder in Mo’okiha o Pi’ilani, the largest voyaging canoe. When our Maui captains, navigators and crew sail her throughout Hawaii and to other nations, the aloha of every contributor will be on board.”

The students’ visit was part of a continuing Sacred Hearts program that integrates Hawaiian culture into the full curriculum to provide learning experiences and knowledge students can tap into for the rest of their lives, Waldrop said.

“This is our place. We need to understand and remember many of these things, so they will not be forgotten. These kids will be going off to high school and college, and as adults will be able to trade on this knowledge to perpetuate the culture,” Waldrop said.

“This is a prototype,” she continued. “Every single teacher on Maui should be bringing their students to (Kamehameha Iki Park), where the canoe is nearing completion for a wonderful learning experience.”

A strong proponent of cultural learning, Waldrop recently spent 21 days as a crew member on the Oahu-built Hokule’a canoe and has developed a curriculum to teach about it.

Gilliom has dedicated himself to working on the 62-foot canoe at the hale at the park for a whopping 17 years, these days from 9 a.m. to 5 p.m. seven days a week and sometimes evenings.

Californian Gilda Cavallaro, on-hand to take photos, and her husband have been sanding the hull and helping in other ways for seven years, even though they live here only part-time. “It is now part of our lives,” she said.

The canoe has 14 coats of epoxy and varnish for its ash, Douglas fir, African mahogany and koa woods.

Students learned about wayfaring, the navigation method employed by Polynesians to guide voyaging canoes across the Pacific through their knowledge of the stars, currents, winds and flight pattern of birds.

Kayla Baybayan, apprentice navigator, explained to students sitting atop the deck that daily chores on the ocean will be carried out using a series of boxes. Separate boxes on the deck house an oven, a propane tank, dishes, life jackets and communications gear.

Special rope rigging on the sides woven by volunteers protects voyagers from falling overboard – a huge problem, since the canoe can sail at speeds up to 55 knots. Gilliom explained that in six seconds under sail, the double-hulled wa’a (canoe) can be 120 feet away from anyone who falls overboard. “And it takes a long time for the vessel to turn around and come back,” he added.

Gilliom, who said he is motivated in part because “Lahaina should have its own voyaging canoe,” topped off his talks by taking students in groups of five on 20-minute outrigger canoe rides.

Noticing the technology brought along by the students, he quipped, “When I was growing up, I never had a phone. In fact, I didn’t wear shoes.”

Over 17 years, the canoe effort has been aided by hundreds of volunteers and has been seen by thousands of people, with many changes in leadership. Gilliom noted.

The Lahaina hui, as well as supporters of the Hokule’a voyaging canoe that will make a worldwide tour beginning next year, have worked hard to relearn the old skills through research and talking story with leading practitioners deep in Polynesia. They are determined that this voyaging information will not be lost again.

Setting a Dec. 21 deadline is designed to push the Mo’okiha o Pi’ilani to completion. The builders are planning a huge celebration, with their ability to do so largely dependent on raising the $50,000 needed to add anchors, chain, masts and rigging to the hull.

Contributions to help launch Mo’okiha o Pi’ilani may be made at www.huiowaa.org or by mailing donations to Hui O Wa’a Kaulua, 525 Front St., Lahaina, HI 96761.