Americanization through the School System

Once Hawai‘i formally became a U.S. territory in 1900, White schoolmen (school administrators and local politicians) implemented an aggressive Americanization campaign in the territory’s public schools. By removing Hawaiian culture, history, and language in the schools and replacing it with American civics and the English language, schoolmen sought to rewrite Hawai‘i’s past by establishing the islands as an American possession since the arrival of American missionaries in 1820. They did so with the intent of justifying America’s presence in the minds of the local population and convincing a skeptical nation that Hawai‘i was American.

In the fall of 1959, at two elementary schools in the newly admitted state of Hawai‘i, Walton Gordon, the first state superintendent, witnessed an amusing pair of student exchanges. At one school, a little Hawaiian boy asked his teacher, “Now that we have statehood, when will we get snow?” At another, “two little native Hawaiians” discussed among themselves the differences between mainland haole (white) and the people of Hawai‘i. 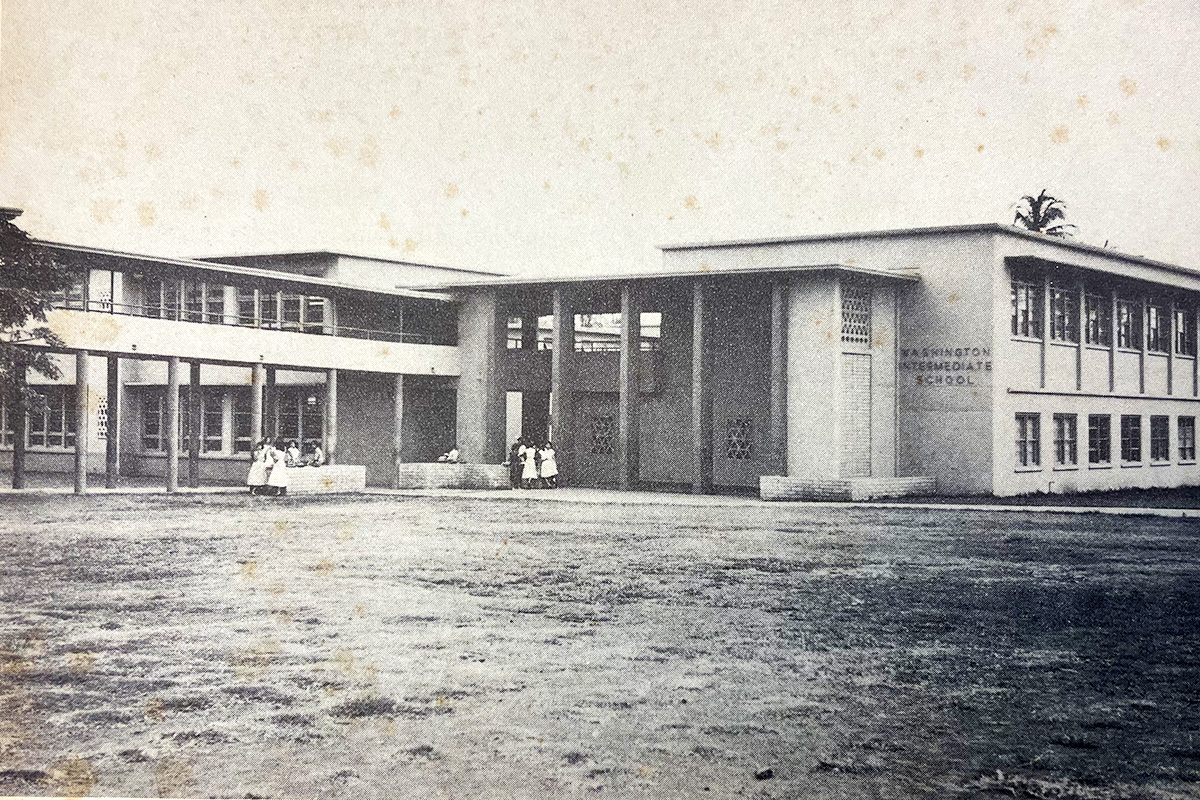 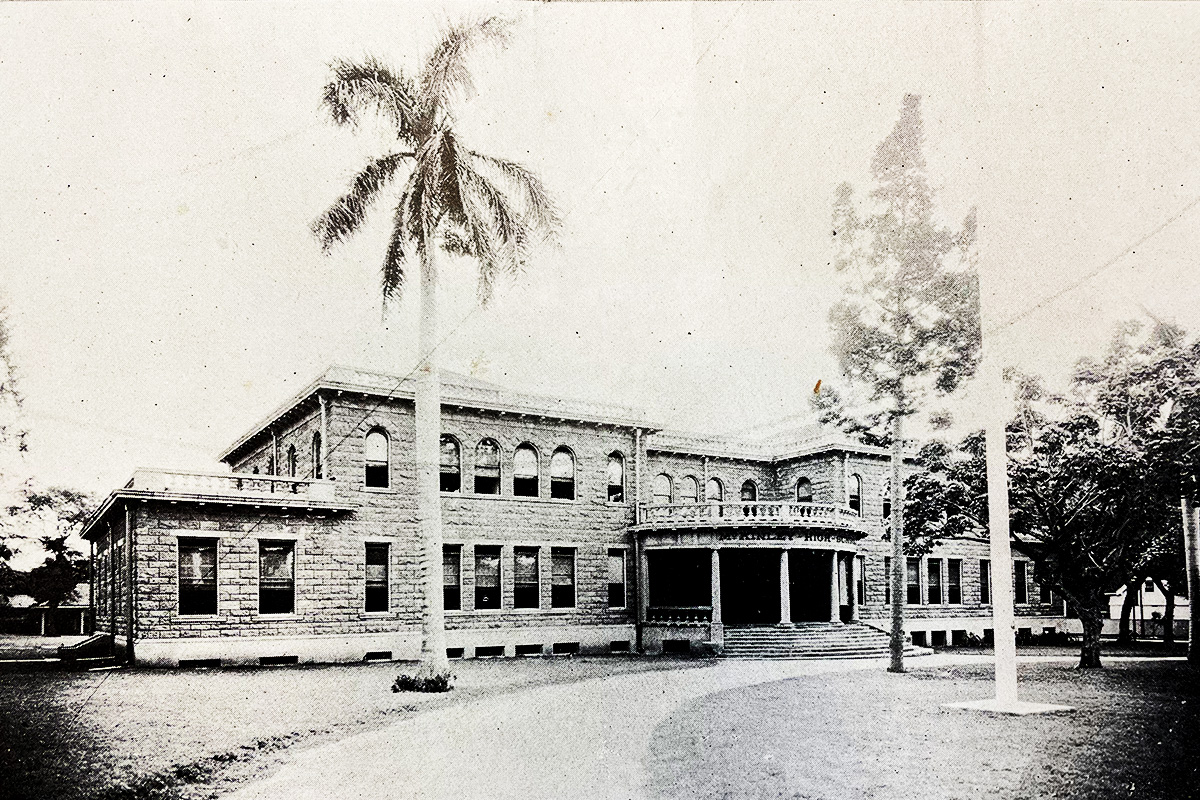 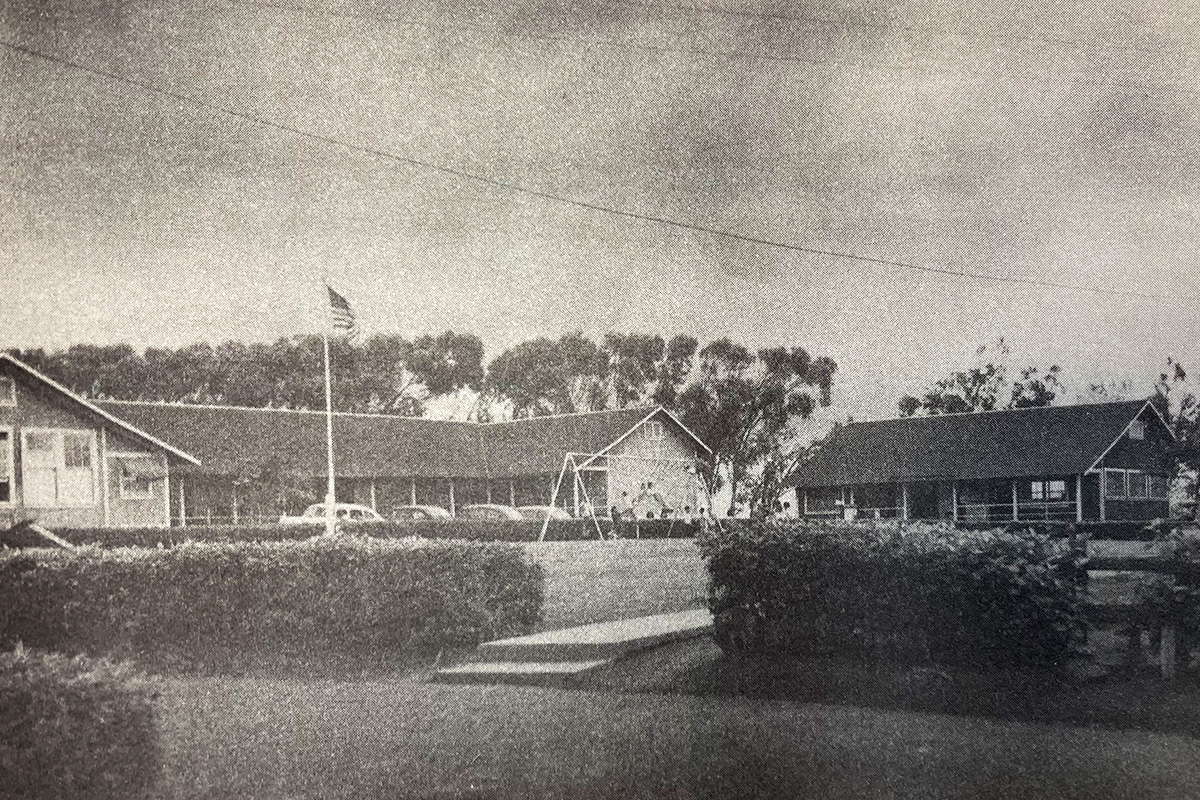 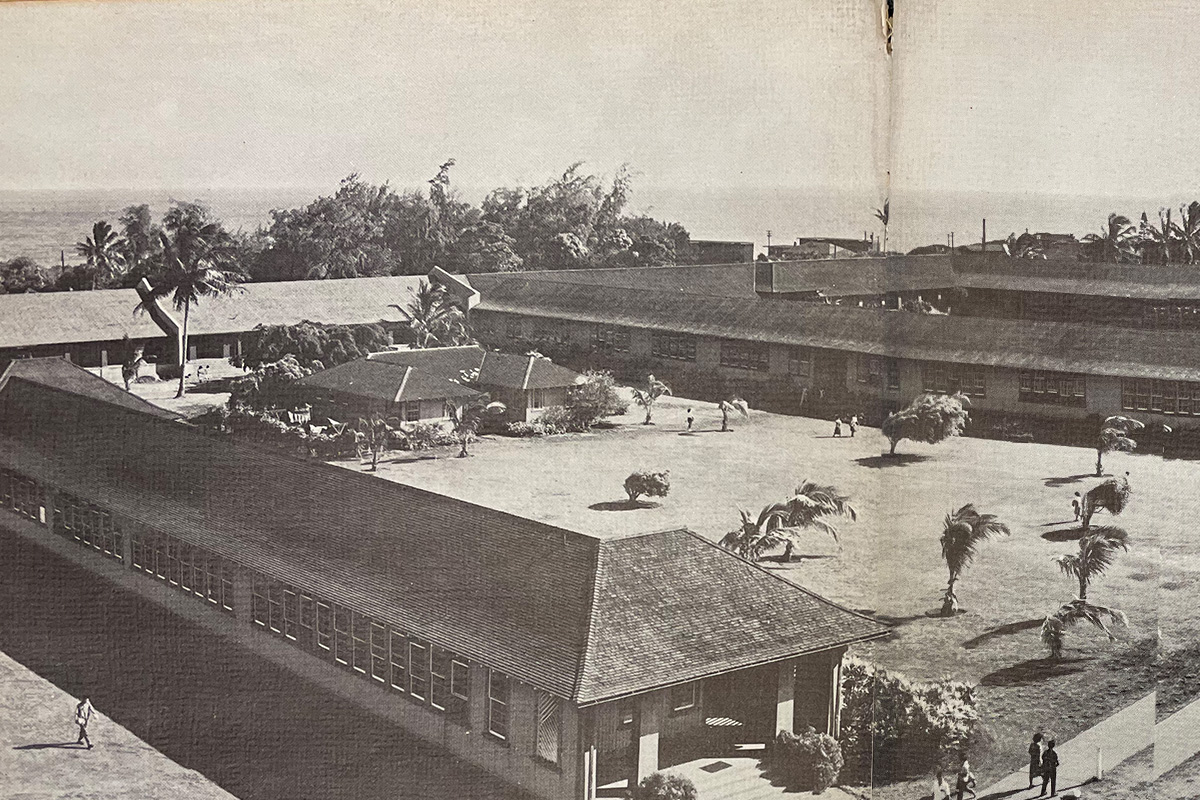 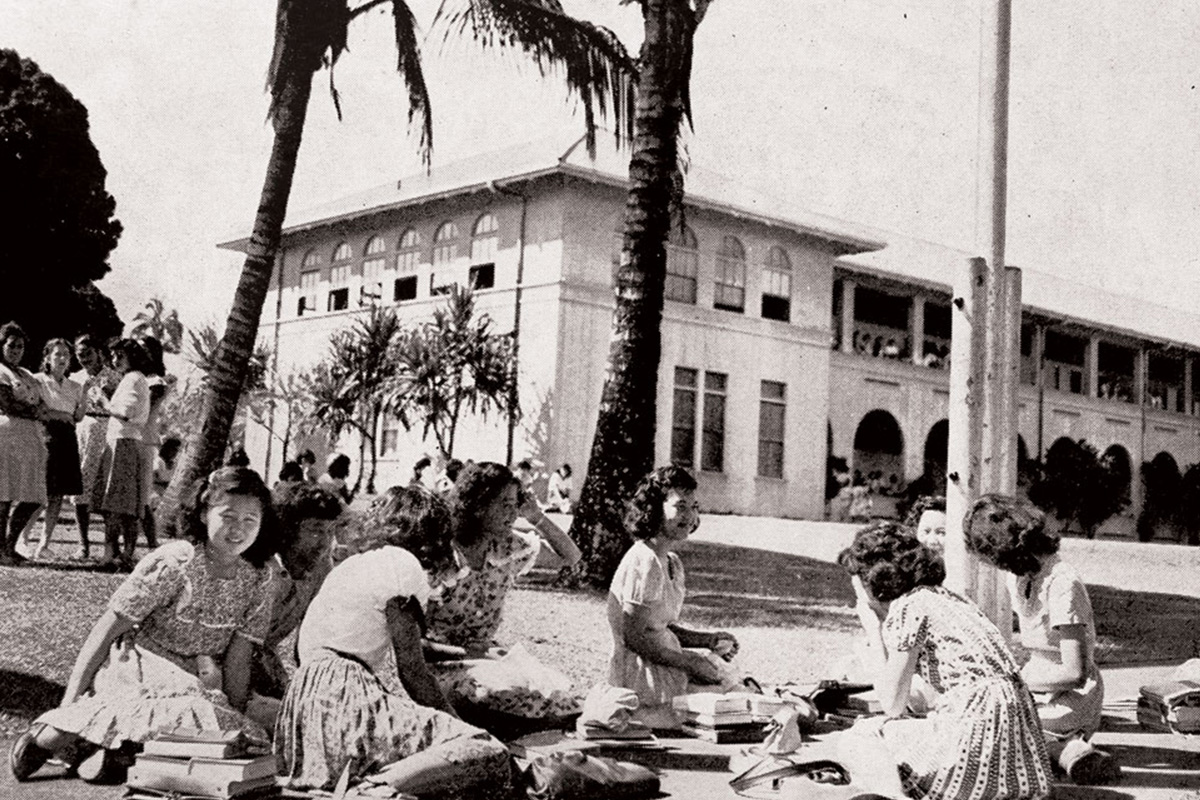 Students on the grounds of Hilo High, 1948 HSPLS 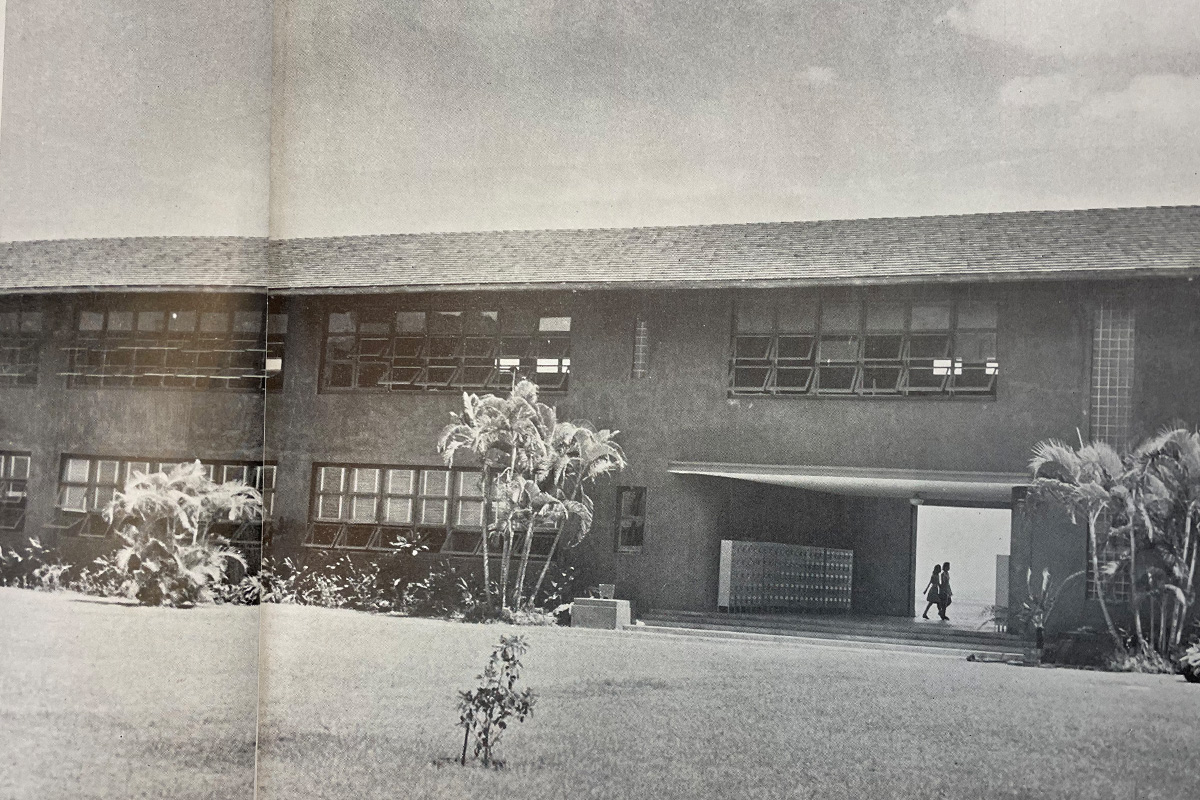 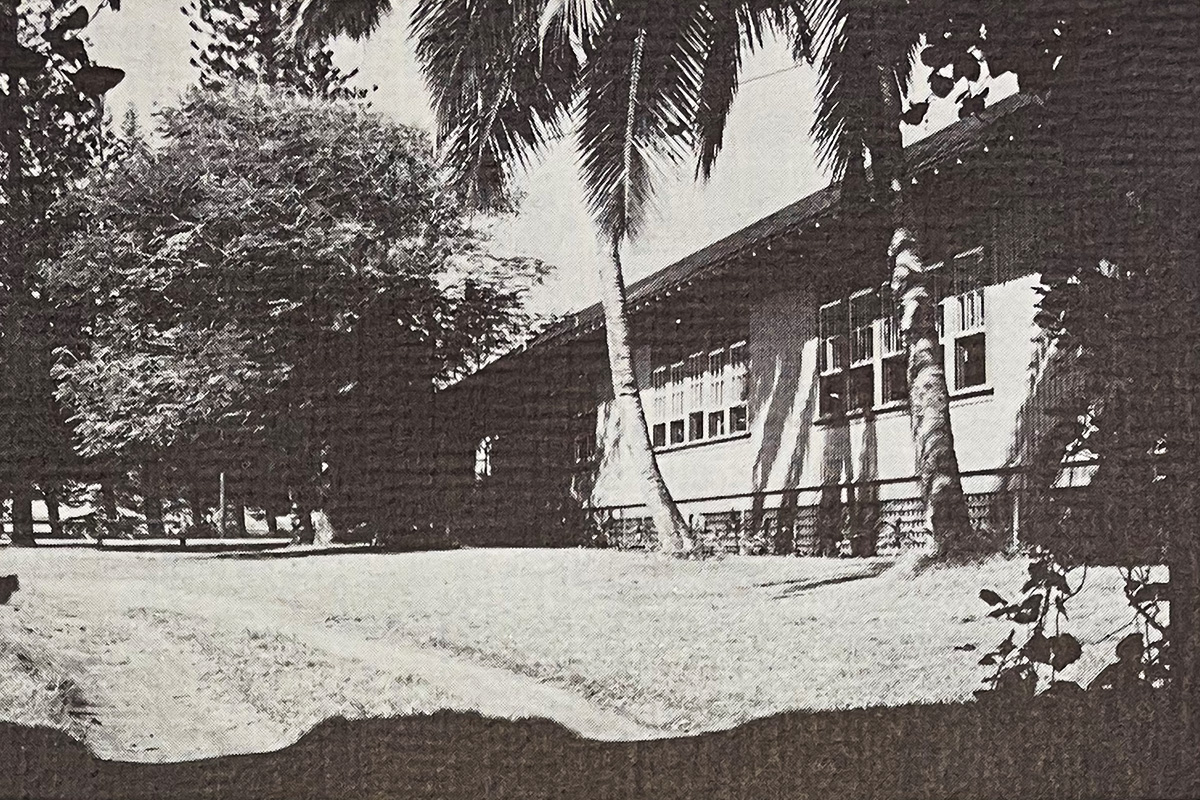 Suddenly, in a moment of exasperation, one of the boys remarked in pidgin English, “You no can say ‘mainland haoles’ now. Us all mainland haoles!”[i] Published in the June 1960 issue of The Nation’s Schools, Gordon sought to showcase to the country the power of American schools in bringing “true democracy” to “diverse people.”[ii] His anecdote depicting “little native Hawaiians” as quaintly naïve, linguistically inept, and excited to be full U.S. citizens, underscored his conviction that Hawaiʻi’s public schools were hard at work making Americans.

But all was not what it seemed. As White, middle-class males born and raised on the continent, educated at elite universities, and socialized to continental attitudes of White supremacy, these schoolmen were not interested in recreating their same paths to success for Hawaiʻi’s majority “brown-skinned and slant-eyed” students or promoting racial equality. [iii] Instead, throughout the territorial period, making Hawaiʻi American meant recreating and institutionalizing the same types of White privilege they enjoyed on the continent. They crafted curricula and policies that aggressively promoted manual training programs and Americanization and celebrated America’s “benevolent” role in “civilizing” the islands. Their goal: to produce a politically passive, dependable nonwhite work force that satisfied the labor needs of local White planters, supported the territory’s White minority government, and embraced American citizenship over their cultural identity.

Confident in their fitness to govern, territorial schoolmen committed themselves to ensuring Hawaiʻi and its people fulfilled their destiny under American leadership. Accomplishing this required implementing a pedagogical “strategy of exclusion” promoting limited educational opportunities framed within race-neutral language of social mobility and rugged individualism (Dahl, 2015, p. 12). Ignoring the realities of White privilege and supremacy that structured American society and regulated race relations, Haole educators wanted to show the nation’s identity as political, bound to the higher ideals of universal democratic principles, progress, and success they associated with the United States. To achieve student acceptance of these values, schoolmen inserted the language of color-blind constitutionalism into their policies as an impartial means to demonstrate that anyone who studied, practiced, and believed in the values of freedom and liberty qualified for American citizenship (Anderson, 2007). In their minds, Hawaiʻi was American, and the territory’s public-school system was perfect for eliminating race as an identity marker and showing the nation anyone could become a citizen.

Despite their grandiloquence, White schoolmen’s colorblindness only extended as far as political, not social, equality. Nothing appeared inconsistent to them about their social attitudes on race and their larger political objective of making Hawaiʻi American. Much like White teachers and administrators in schools located in the post–Civil War South, on Native American reservations, and in the Philippines, Hawaiʻi’s Haole educators adopted and applied their civic sense of White duty to shape the destinies of other races for the “future good of the world” (Smith, 1988, p. 233). This was no simple task. Uplifting people of color required cooperation and coordination between policymakers and educators in constructing, publicizing, and enforcing school laws and curriculum. Hawai‘i’s Organic Act (1900) aided White schoolmen’s quest by empowering the superintendent and the territorial school board at the Department of Public Instruction (DPI) with complete control over Hawaiʻi’s public schools. These government officials went on to partner with the presidents of the Territorial Normal School (TNS) and the UH to produce a cabal of unelected White elites who asserted absolute control over school policy.

Numerous superintendents asserted the inherent Americanness of Hawaiʻi’s identity and extolled the benefits of U.S. rule in an effort to legitimize American occupation. Using “idealized visions of the United States’ past” (Crawford, 1929, p. 151), Superintendent Will C. Crawford (1925–1934) pointed to the importance of studying the biographies of American historical figures as an effective means of “character training.” He believed studying the lives of U.S. Presidents Washington, Lincoln, Roosevelt, and Wilson revealed crucial “ideals which led them to struggle and persevere in the face of great difficulties” (Crawford, 1929, p. 151). He highlighted courage, honesty, vigor, sacrifice, humility, and optimism as key character traits he wanted Hawaiʻi’s students to model. These inherent features of America’s famous leaders formed a “criteria for judging great men” that Crawford extended to include heroes from Greek and English literature while ignoring equally great Indigenous examples of wisdom, courage, and determination exemplified by the exploits of various aliʻi (chiefs) (ʻUmialiloa, Kaʻahumanu, and Kamehameha I) and cultural heroes (Maui and Pelehonuamea). Instead, Crawford offered Robin Hood, Hercules, William Tell, and even “stories from Aesop and Brer Rabbit” as prime examples on the proper “philosophy of life” dedicated to self-sacrifice and perseverance, effectively marginalizing Native Hawaiian models (Crawford, 1929, p. 151).

Superintendent Oren E. Long (1934–1946) continued the discussion on character training as an “objective of education” by examining 19th-century school reports from Richard Armstrong, Congregationalist missionary and Hawaiʻi’s minister of education (1847–1860) (Long, 1928, p. 8). Like his predecessors, superintendents Willis T. Pope (1910-1913) and Vaughan MacCaughey (1919-1923), Long credited American missionaries for developing and instilling moral education in Hawaiʻi, defining their efforts as critical to the advancement of Native Hawaiians and foundational for the territory’s public schools. Relying on Armstrong’s reports to describe the “domestic conditions” of Native Hawaiians as “deplorable” and explain how Native “indolence” represented one of their “great master evils” hindering their moral development, Long presented missionary-led schooling as a compassionate but necessary intervention. (Long, 1928, p. 87) To him, the kingdom’s free common schools provided structure and order for Native Hawaiians. They promoted “civic consciousness,” taught there was “such a thing as law,” and prepared them to become “law-abiding people.” Long, 1928, p. 88) He also praised Armstrong for leading the “one great, good and noble cause of moral, physical and intellectual education” by emphasizing how his efforts to implement Christian teachings, manual training, and English-language instruction into public education were critical for saving Native Hawaiians from themselves (Long, 1928, p. 88; Long, 1938, p. 13).

Much like Pope, MacCaughey, Crawford, and Long, Governor Wallace R. Farrington (1921–1928) also underscored Hawaiʻi as inextricably linked to the United States since the arrival of American missionaries in 1820. He bluntly praised them as “pioneers,” “American men and women who established American culture, education, morals and free government in Hawaii” (Farrington, 1922, p. 20). In 1924, Farrington pressed graduates of the TNS to remember that Hawaiʻi had an “American background covering more than one hundred years of its history” (Farrington, 1924, p. 2). Two years later he reiterated the same message stating, “American ideals and practice were in full swing in Hawaii when the present great states of the Pacific Coast were barbaric wilds” (Farrington, 1926, p. 1). To Farrington, the cumulative effects of such a deep historical tradition in “American ideals” had civilized the Indigenous population to the point that Americans now had “ceased to worry over the Hawaiians” (“School Aid to Hawaii Is Told by Farrington,” 1932, p. 2).

For territorial schoolmen, history showed Hawaiʻi was always destined to become American; its people just did not know it yet.