These were institutions founded, staffed, and, initially, financially supported by American missionaries. Their goal was to make to Native Hawaiians literate in their own language in order to read the Bible. Later, local aliʻi (chiefs) took over responsibilities for building and supporting the schools who were increasingly being taught by Native teachers. 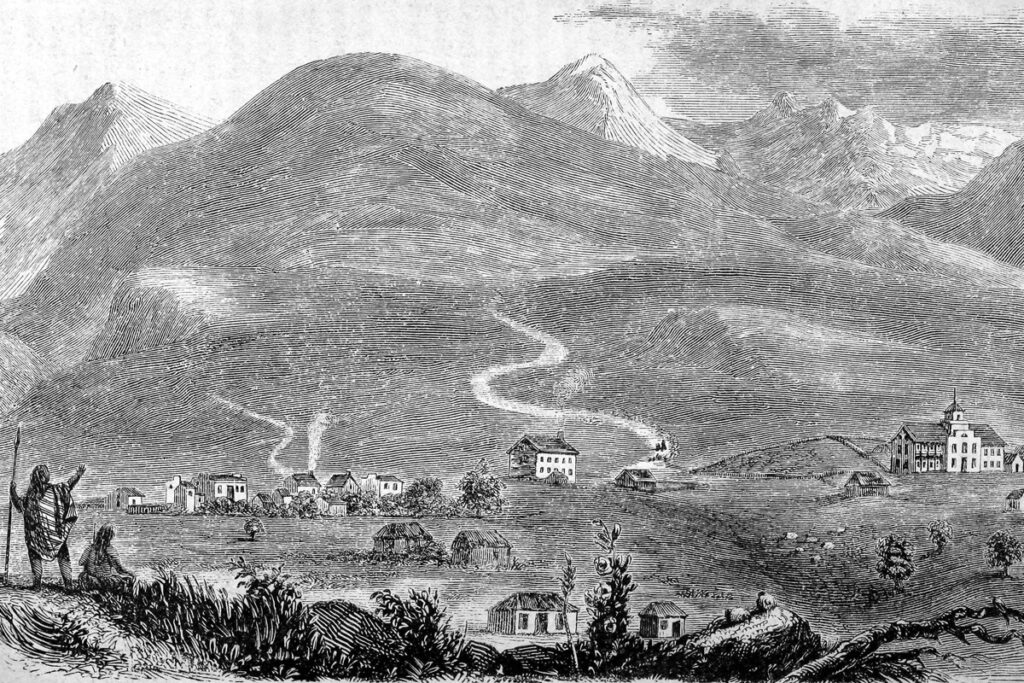 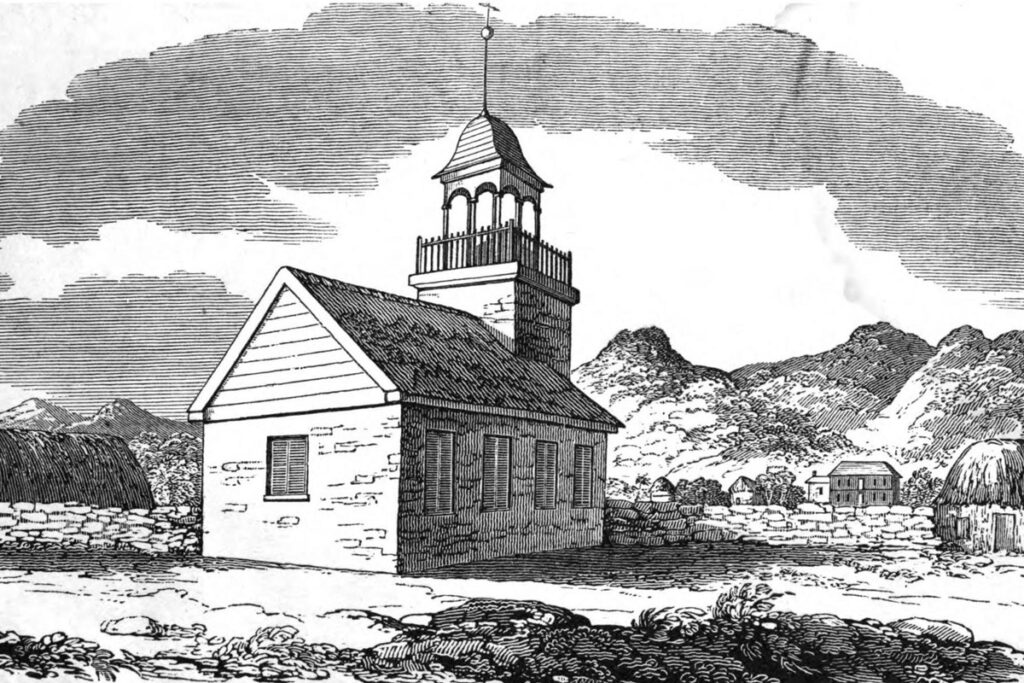 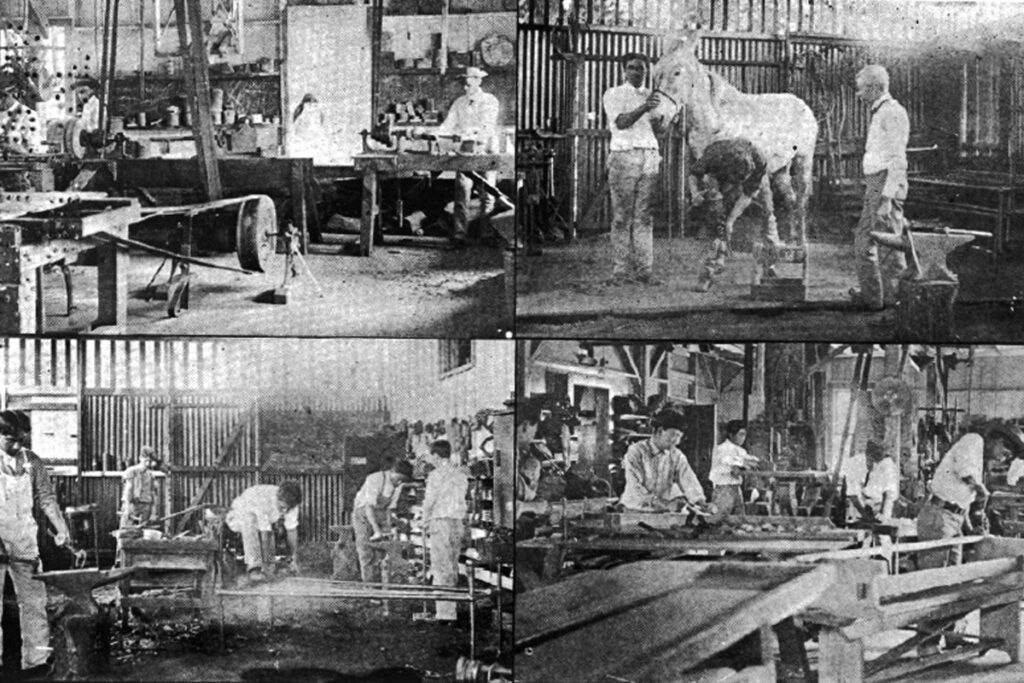 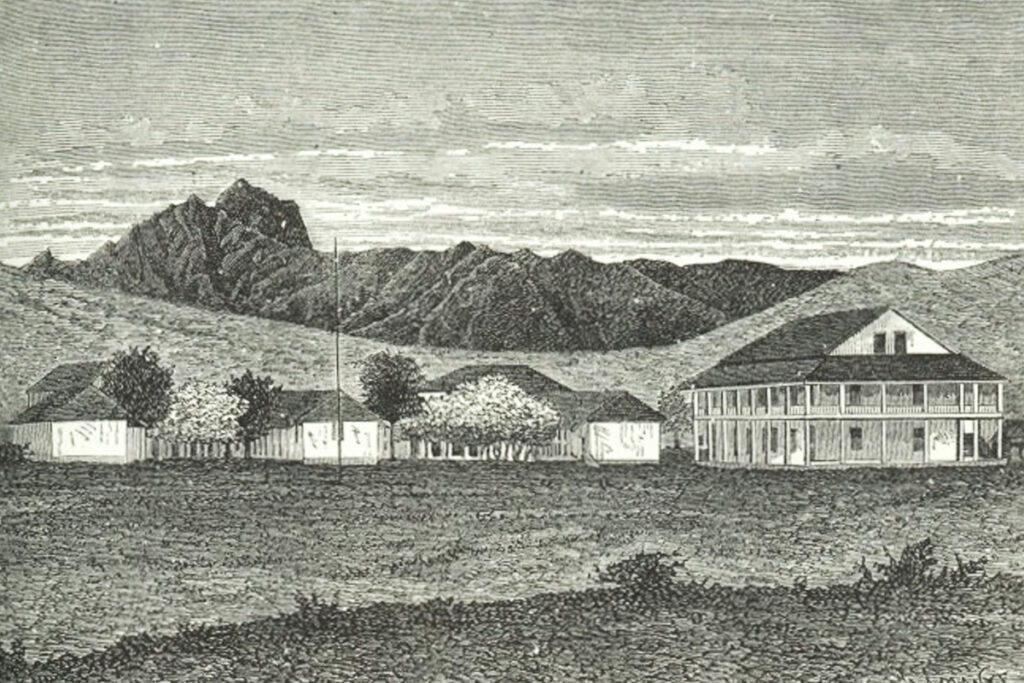 Punahou School. Drawing by J. Moynet, based on a photo by H. Chase. Public domain, via Wikipedia Commons 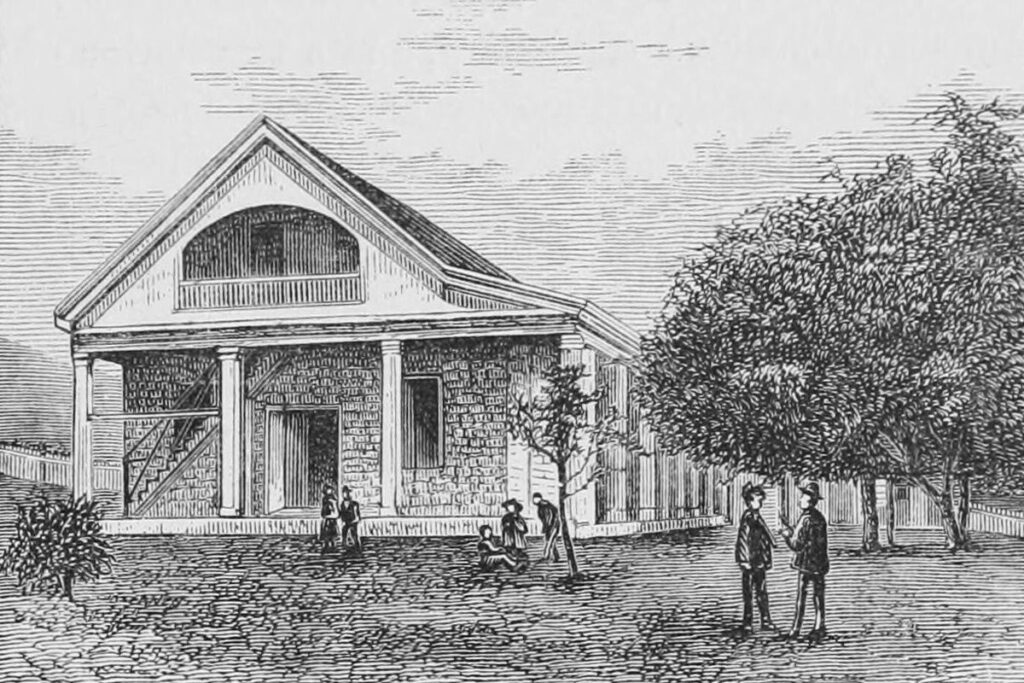 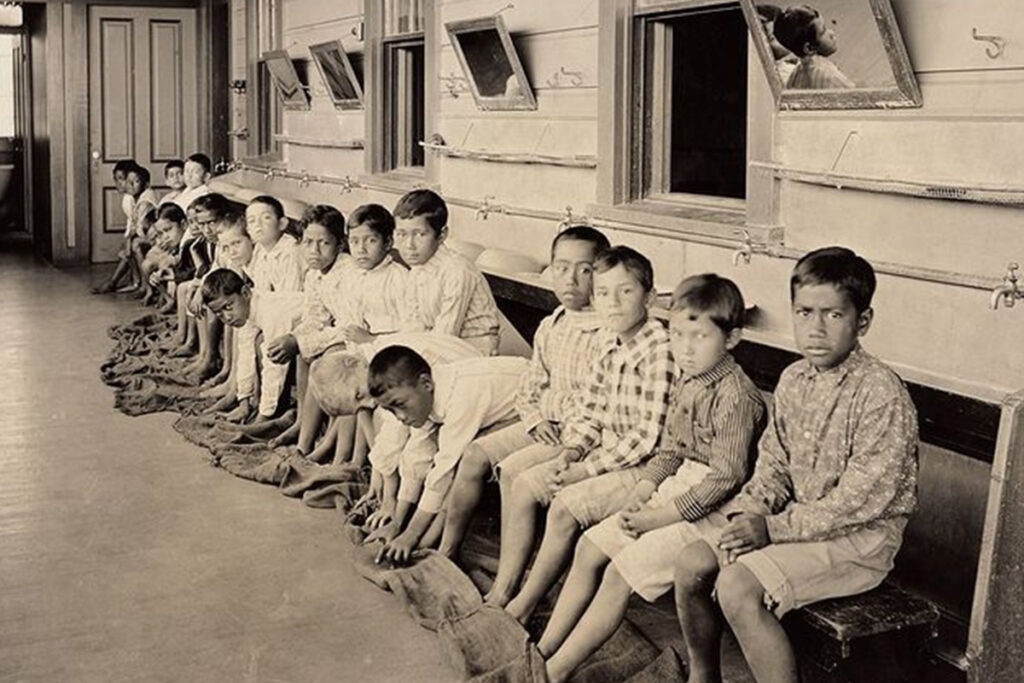 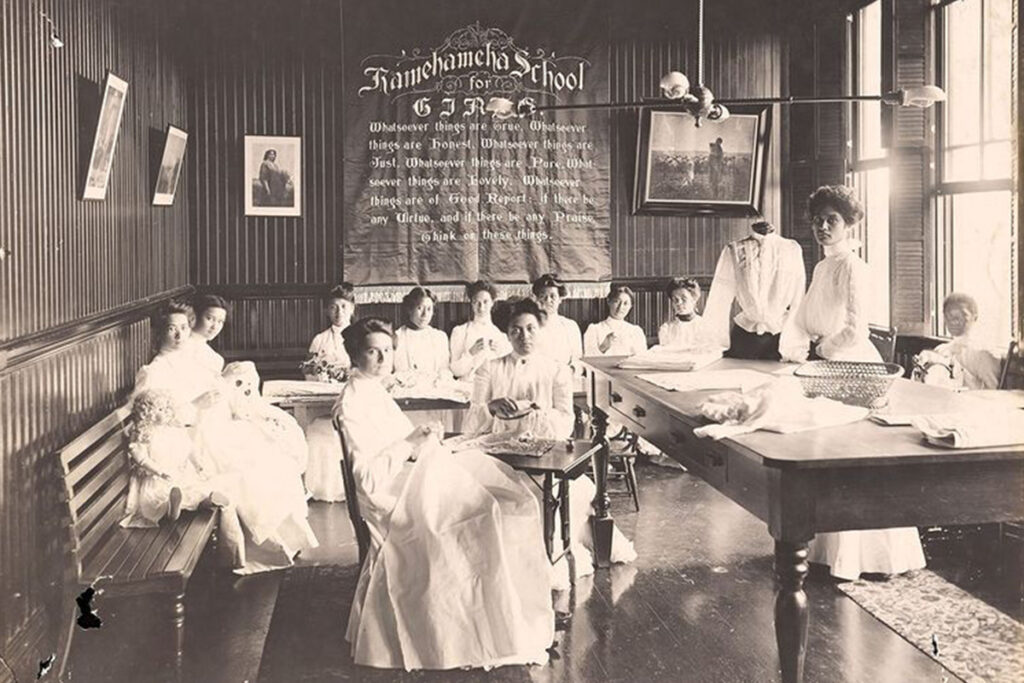 A major step for creating national unity as the government took over the operations,
curriculum, and staffing of the nation’s schools. It also reflected the vision of a young
Kauikeaouli (King Kamehameha III, 1824-1854) early in his reign when he exclaimed:
“He aupuni palapala koʻu. O ke kanaka pono ʻoia koʻu kanaka.” (Mine is the nation of
education; the righteous person is my person (Pukui, 1983)

At 2 a.m. on July 6th, 1887, armed gunmen belonging to two all-White separatist groups, the Hawaiian League and Honolulu Riflemen, surrounded Mōʻī (king) David Kalākaua at gunpoint and demanded that he sign a new constitution written by Lorrin Andrews Thurston, a member of the League. This new document, never ratified by the legislature, installed members of their group into his cabinet, empowered the cabinet with decision-making authority over the mōʻī, disenfranchised three-fourths of Native Hawaiians and all Hawaiian citizens of Asian ancestry, and allowed foreign landowners the right to vote. advocates the overthrow of the monarchy and annexation by the U.S. Several members from both groups would go on to support the 1893 overthrow of Kalākaua’s sister, Liliʻuokalani, and lobby Congress for American annexation in 1898.

Kalākaua died in 1891 and was succeeded by his sister, Liliʻuokalani (1891-1893). She quickly proposed a new constitution that would restore executive power to the monarchy and extend voting rights for most Native Hawaiians. Her plans angered many of Hawaiʻi’s haole elite and, in response, they formed a 13-member Committee of Safety with the goal of overthrowing the monarchy and seeking annexation by the United States. On Jan. 17th, 1893, armed gunmen stormed ʻIolani Palace and forced the Queen to abdicate. The Committee of Safety soon established a White-minority provisional government (the Republic of Hawaii (1893-1898) headed by Sanford B. Dole, son of American missionaries. U.S. President Grover Cleveland opposed the provisional government and called for the queen to be restored to power, but Dole refused. In 1895, Hawaiian royalists led by Robert Kalanihiapo Wilcox, a Native Hawaiian military officer, attempted a counter-coup against the republic but failed. Queen Liliʻuokalani was arrested for her alleged role in the plot and convicted of treason. Placed under house arrest, the queen agreed to formally abdicate and dissolve the monarchy believing the U.S. would soon intervene. 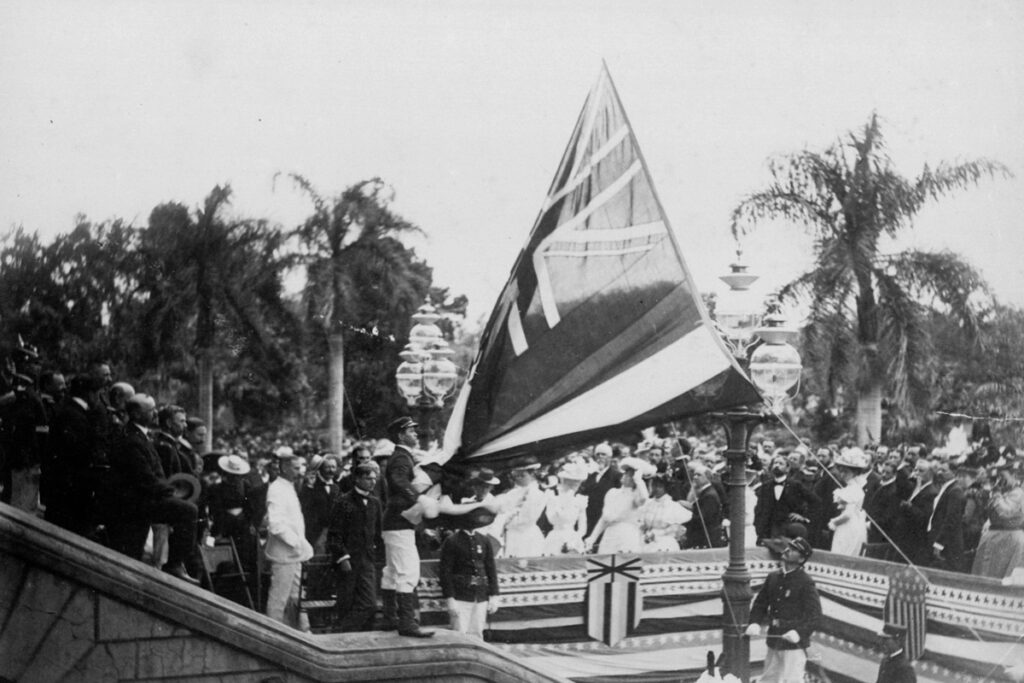 Removal of Hawaiian flag from ʻIolani Palace, 1898 Public domain, via Wikimedia Commons
1896 Act 57, section 30: English made the “medium and basis of instruction” for all schools

This act was passed during the time of the White minority government (the Republic of Hawaii) and it established English as the only medium of instruction allowable in any school, public or private. This move by the White minority government was to garner support for U.S. annexation by demonstrating how English remained the language of the land. This year also marked the closure of the last three Hawaiian-language public schools on Oʻahu leaving only one left on Niʻihau.