COE Alumnus is Principal of the Year 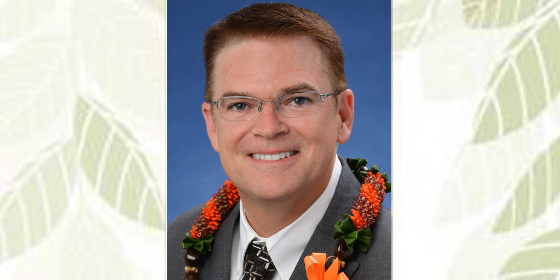 Fred Murphy, Mililani High School Principal, has been named the state’s National Distinguished Principal of the Year by the Hawai’i Association of Secondary School Administrators (HASSA). Murphy was recognized locally during an event at the Hale Koa Hotel and nationally at the National Association of Secondary School Principals (NASSP) National Principal of the Year Institute in Washington D.C. where he joined the 49 other state awardees.

“The College of Education (COE) at the University of Hawaii was truly impactful in my development as an educator, and later, educational officer,” Murphy said. “I have vivid memories of the caring and knowledgeable professors who truly knew what was going on in our public schools and I felt well-prepped to enter the DOE.”

Murphy, who earned his BEd in Secondary Education from the College of Education, has been an administrator for 13 years. While he was a student at the COE, Murphy served his peers as a senator and as Chairman of the UH Student Caucus (UH System), which he says taught him a great deal about the inner workings of the Board of Regents and the Hawai`i State Legislature.

Seven years ago, Murphy became principal of Mililani High School, his alma mater. Under his leadership, curriculum offerings grew significantly with over 23 Advanced Placement courses, the most of any public or private school in Hawai‘i, as well as 27 Career and Technical Education programs, 52 student extracurricular clubs, and 47 athletic teams.

“I am indebted to the COE for providing me opportunities to grow and lead,” Murphy concluded.