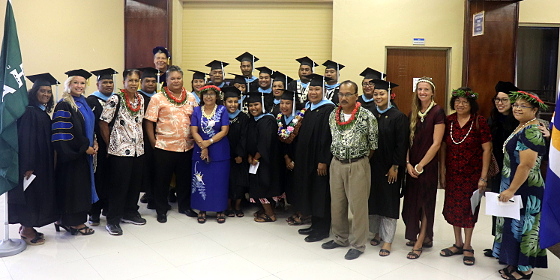 On July 26, 2019, the first cohort of the University of Hawai‘i at Mānoa College of Education PACMED program graduated in the Republic of the Marshall Islands (RMI).  PACMED is a Master of Education (MEd) degree program in the Department of Curriculum Studies with a focus on culturally-responsive, Pacific, place-based STEAM subjects (science, technology, engineering, arts, and mathematics). The program was previously known as the MSLMED, which focused on middle and secondary level students and began in 1996, going fully online in 2009.

“This historic RMI Commencement was a festive celebration attended by about 400 family members, friends, and dignitaries,” said Deering. “RMI President Dr. Hilda Heine, who received a master’s degree from the College of Education, gave an address urging the graduates to use their deepened knowledge to steer the canoe of education toward a prosperous future in which the grave threat of climate change is addressed head on.”

PACMED is a two-year program focused on the nine RMI Public School Standards for Teachers, plus a tenth standard focused on place-based STEAM teaching. During the semester, courses are delivered in a live online classroom, while summer classes are in-person and hands-on. Topics include marine science, organic gardening, computers, robotics, ethnomathematics, as well as traditional cultural practices, such as weaving, fishing, canoe building, and navigation.

“Pacific leaders are needed to solve Pacific problems,” Zuercher said. “The PACMED program builds on indigenous knowledge of place and culture while addressing emerging problems such as sea-level rising, health, illegal fishing, food security, and sovereignty. The ocean unites us in this mission.”