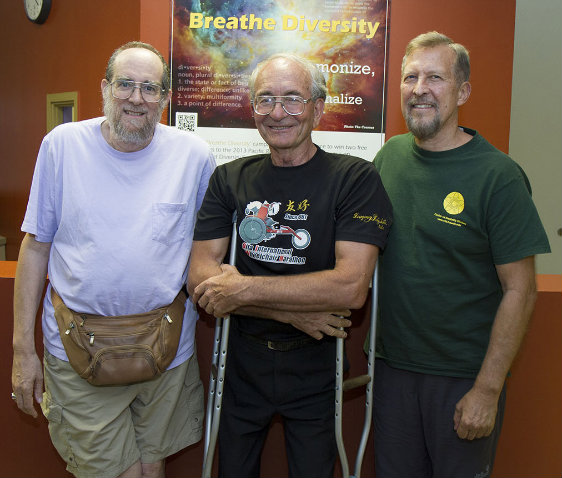 Fulbright Scholar Yevgeniy Tetyukhin spoke to an intimate group at the University of Hawaiʻi at Mānoa College of Education Center on Disability Studies (CDS) about disability from a Kazakhstani perspective on October 29, 2012. A linguistics professor from North Kazakhstan State University, Tetyukhin is an international wheelchair racer and disability advocate.

During his five-month visit to CDS, Tetyukhin will conduct research, audit classes, and hold two more talks to broader audiences before returning to Kazahkstan in February 2013. He is also preparing a lecture on disability and multiculturalism, which he will deliver in Guam as part of the Fulbright program.

Tetyukhin expressed his gratitude to longtime friends and colleagues, CDS Director Robert Stodden and Associate Professor Steven Brown, for introducing him to disability culture, “a culture of treatment, attitude, and respect of self and others,” Tetyukhin said. A participant in the Pacific Rim International Conference on Disability and Diversity since 2006, he has been using CDS as a model for organizing course themes, conferences, and brown bag series.

“This is my life story, a success story. I am a survivor,” Tetyukhin began his talk. He shared that, by studying, learning, and teaching, he is fulfilling his mother’s wish for her son with a disability to become a scholar. As a young child in 1945, he became paralyzed in one leg after a protracted illness with polio. He recounted how his father fashioned a pair of small crutches for him and how his mother taught him to never give up, that there would always be uphill struggles, and to “be ready.”

Armed with the lessons from his wise parents, and the influence of his esteemed colleagues, Tetyukhin said he is most proud when he can impact the lives of his students, showing photos of a woman with cerebral palsy whose life he helped change dramatically. “I set up a group, an English club, and met with them daily, showing them how to prosper in life. Together, we won a grant, and [this student] began sitting upright, speaking three languages better and more quickly.”

Despite problems with equal treatment, equal employment, and the perception of people with disabilities in his home country, Tetyukhin’s optimism is palpable. “A group of like-minded people can make a difference,” he concluded.