COE Faculty Member to be featured on PBS Hawaiʻi 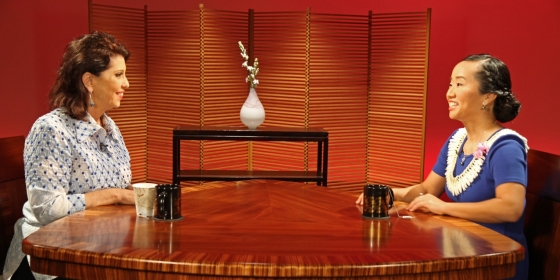 Linda Furuto, Associate Professor of Mathematics Education in the College of Education (COE), was invited to be a guest on PBS Hawaiʻi’s Long Story Short. A weekly sit down talk show with President and CEO Leslie Wilcox, the show features intriguing people in Hawaiʻi who have inspiring stories to tell.

With its casual ‘talk story’ format, the show conveys an intimate snapshot of its guests, their lives, and their work. Former guests include columnists, consultants, activists, a state circuit judge, a U.S. senator, and prominent business men and women. Furuto was selected for her significant contributions to the community as well as her sensitivity and attentiveness to culture and education among her numerous other endeavors.

Furuto joined the COE Department of Curriculum Studies in 2013 after serving as Associate Professor of Mathematics at UH West Oʻahu where she gained recognition for building the mathematics program and her Ethnomathematics Institute. Featured in numerous print, radio, and television media over the past eight years, the institute addresses issues of equitable and quality education through the exploration of culturally responsive, place-based STEM.

Furuto has incorporated the Hōkūle‘a Worldwide Voyage into the institute’s P–20 curriculum. An integral part of the voyage, Furuto served on the first international leg from Hawai‘i to Tahiti as apprentice navigator and education specialist while liaising with the students and faculty of the COE. Since then, she has voyaged on subsequent legs to American Sāmoa, Sāmoa, Olohega (Swain’s Island), and Aotearoa (New Zealand). She will voyage to South Africa in November.

During the PBS segment, Furuto focused on themes, including the importance of ʻohana and values; servant leadership and being stewards of the land; engaging in lifelong learning and teaching; embracing changing winds; and navigating past, present, and future visions. “One of the most important lessons I have learned is about reciprocity,” she stated. “We would not be here without the people and land that raised us to embrace this generation and time. It is our inherited privilege, gift, and responsibility to give back to Island Earth for those to come.”